If the Middle East has become a huge laboratory of information effects, Libya’s part in the experiment is the most difficult and uncertain:  that of control animal.

From the perspective of information flows, Libya resembles Cuba more than Tunisia or Egypt.  Internet access, for example, is only 5 percent for the country, compared with 35 percent for Tunisia and 20-25 percent for Egypt.  (Cuba:  less than 2 percent.)  Penetration by social media like Facebook is proportionately low.  Undesirable TV stations are not merely banned but jammed.

This dearth of information isn’t an accident.  The Qaddafi regime, like that of the Castro brothers in Cuba, has chosen control over diffusion in a big way, and applies extreme measures to insulate the Libyan public from the temptations of the digital age.  Unlike the Castros, however, Qaddafi has been liberated from the “dictator’s dilemma”:  whether to opt for ignorance and poverty, or go for development with its subversive ideas.  He can tap into a golden mountain of petrodollars any time he feels the need.

Information effects helped seal the fate of Ben Ali in Tunisia and Mubarak in Egypt.  Both regimes were ruled by grandfathers who were utterly without a clue about the tools available to their grandchildren.  By exploiting Facebook and raw video from cell phones, and forging a symbiotic relationship with satellite TV networks like Al Jazeera, the young protesters seized control of the narrative which explained events on the street.  The crowd was the brave and noble hero.  The forces of repression were the villains.  This story was accepted without question by the foreign media, which broadcast it to an enthralled world – and back into the living rooms of Tunis and Cairo.  From that moment, every political actor in the two countries confronted a very public decision:  which side am I on?

Qaddafi belongs to the grandfathers’ generation, and labors under the weight of an unsavory image.  He’s an obvious megalomaniac who has changed his country’s name and flag, wears outlandish costumes, and is liable to say things which must gag even his devoted sons:  “All my people love me.  They would die to protect me,” for example, or “If I were president I would have resigned, but I have no position to resign from.”  In Libya, the regime narrative is Marx Brothers material.

Yet Qaddafi has the courage of his megalomania.  Unlike Ben Ali or Mubarak, he’s willing to slaughter any number of people to stay in power – and, more significantly, he appears to have retained enough of a following to do just that.  The true narrative of his regime is rooted in a tenacious violence.  This isn’t a story about good guys and bad guys but about winner and losers.

Because of fear and limited access to means of communications, those who oppose Qaddafi have failed to convey a coherent narrative about who they are.  Few believe them to be pro-democracy.  Nobody considers them to be “freedom fighters.”  Generally labeled “rebels” or “rebel forces” by the news media, they bear an uncertain relationship to the chanting crowds in Tunis and Cairo.  Anthony Shadid calls the struggle in Libya “the most militarized version of Tahrir Square in Cairo.”  But he adds:

No one knows what to call this conflict – a revolution, a civil war or, in a translation of what some call it in Arabic, “the events,” a shorthand for confusing violence.

That’s what a narrative vacuum projects to the mind:  confusion and uncertainty. 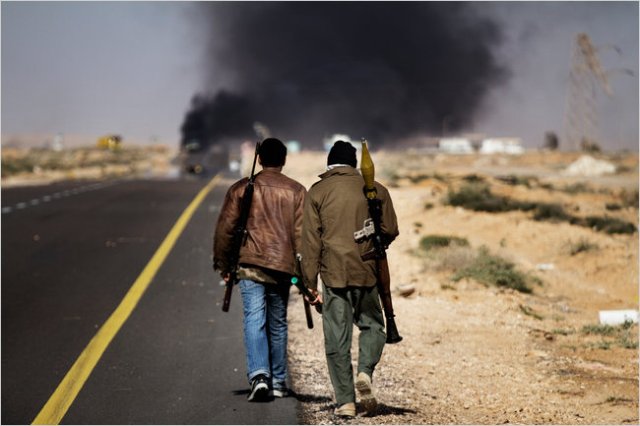 By becoming the protagonists of their own story, protesters in Tunisia and Egypt won the support of the world.  The Libyan opposition, portrayed against a fractured landscape of confusing violence, has had the opposite effect.  It has become an argument wielded by those in the West who wish to avoid intervention in the conflict.  As a popular uprising, it was characterized as anarchic:  “everyone is in charge – and no one is in charge.”  After a provisional government was organized in Benghazi, its obscure provenance and uncertain ideology have been put forward, by anti-interventionists of my acquaintance, as reasons for staying out of Libya.

Nowhere is the failure of the opposition to seize the information agenda more apparent than in the global debate about a “no-fly zone.”  The war on the ground is not going well:  Qaddafi won’t be toppled without a push from foreign powers.  This has been clear for days if not weeks.  Foreign support to the anti-Qaddafi forces can take many forms, from diplomacy through covert aid to full-bore military intervention.  Neither the Benghazi government nor the opposition as a public has clearly signaled a preference.

I have been unable to learn who first proposed establishing a no-fly zone over Libya.  Once articulated, however, the idea absorbed all the attention and controversy surrounding the Libyan crisis, effectively smothering discussion of other forms of assistance.  In the news media, the connection between Libya and a no-fly zone has taken on an air of inevitability:

Thus the debate about foreign intervention to overthrow Qaddafi has been transformed into a debate about the need for a no-fly zone.  I suspect this is an informational disaster for the opposition, the consequences of which will be more severe than any battlefield defeat – indeed, may well be terminal.  For all of Qaddafi’s brutality and bizarreness, no Libyan voice is now making a persuasive case to the world for his elimination.  Instead, even in Libya, the focus of attention has shifted to the technical and ethical problems of organizing a no-fly zone over a vast desert nation.

The role of Al Jazeera in Libya deserves more space than I can give it here.  As it has in every theater of the Arab uprising, the network has taken the side of the opposition in all but name.  Qaddafi’s forces, in turn, have ambushed and killed its staffers.  The Al Jazeera message, however, is viscerally anti-occupation and anti-intervention when it comes to the West’s dealings with the Arab world.  Libya presents a dilemma not encountered elsewhere:  whether to embrace the needs of the uprising, or adhere to a strict anti-interventionist line.  The way the network handles this dilemma will powerfully influence the global public’s perception of events on the ground.

The control laboratory animal is the one that remains untouched by the experimental conditions.  Its purpose is to tease out specific effects.  In the great laboratory of the Middle East, the Libyan public, by means of political repression, has been fenced out of most information flows available to neighboring populations.  If the effects differ as well – if Qaddafi regains control of the country by sheer force – the world will learn in the blood of his opposition just how subversive digital communication has proved to other, less savage regimes.

This entry was posted in narratives, web. Bookmark the permalink.