Bloody Syria in a transparent world

A barrage of YouTube videos has recently hit the web documenting the demonstrations in Syria, and the brutal response by the regime.  Barrage is the right word, too.   Watch the first minute of the video below – an attack last Tuesday on protesters in the city of Homs – and try to resist the urge to scream.  The rattle of automatic weapons swells and ebbs like savage background music.  It never seems to end.

Relentless gunfire by security forces is the theme of many of the new videos.  The sound pounds our ears as we watch a protester shot down then rescued by a motorcycle rider in the city of Douma, or the crowd crouching in terror in the city of Daraa, or a young man trying to duck for cover and not making it in some unknown location of Syria.  This is a government which manages public defiance with a reflexive ferocity.

Eight protesters are said to have died in the violence at Homs, only two days after the Syrian president, Bashar Assad, in a concession to the protests, promised to end the country’s repressive emergency laws.  Assad’s problem is that the regime can’t survive without changes yet can’t truly reform without collapsing in the manner of kindred autocracies in Egypt and Tunisia.  Call it the Gorbachev dilemma.  Mikhail Gorbachev tried to reform the Soviet Union by promoting glasnost, or transparency.  He lifted the veil of secrecy necessary for a failed totalitarian system to drag on:  in the end, the Soviet Union fell apart because of his attempt to save it.

Assad, unlike Gorbachev, has no love of transparency – but he rules, uncomfortably, in a transparent world.  The Syrian public is armed with the most subversive weapon yet devised, the cellphone.  Massacres will be recorded.  Posted on YouTube and Facebook, they will become known to the world.  Authoritarian regimes, like individuals, behave differently when they are aware of being watched, and calibrating repression is tricky business.  The violence required to retain power may utterly undermine international support the Assad regime needs to survive.

It wasn’t always so.  Bashar Assad inherited the presidency from his father, Hafez, who in February 1982 confronted an uprising in the city of Hama led by the Muslim Brotherhood.  Hafez Assad felt no need to make speeches promising reform.  Instead, he surrounded Hama with artillery and pulverized it, annihilating much of the population.  To this day, nobody quite knows how many died:  maybe 10,000, maybe 40,000.  Such a scarcity of information about so many deaths is indicative of an opaque world.  From Hafez Assad’s perspective, the Hama massacre was conducted in peace and quiet, behind drawn curtains.  Despite the enormity of the event, it took weeks for rumors of it to seep into global consciousness.

We never saw the dead and dying of Hama.  We never heard the gunfire there.  Because of this, the political consequences were entirely favorable to the regime.  Not only was the uprising crushed, but Assad acquired a terrifying reputation, which silenced the opposition for three decades.  Hama became a symbol of authoritarian toughness, no doubt much admired by Assad’s fellow rulers in the region.  It inspires them still, as Muammar Gaddafi’s shelling of Misurata in Libya shows.

But discreet repression on the scale of Hama is an impossibility today, even for Gaddafi – and the desperate and isolated Gaddafi makes an unappetizing model for Bashar Assad.  Rather than impose his will, he must work to control the narrative about events in Syria, a skill which doesn’t come naturally to an authoritarian.  The Syrian media is state-controlled, and thus wholly devoid of credibility.  Foreign journalists, particularly the international TV networks, must be kept out, but the country’s borders with Lebanon and Turkey are porous, and there’s always those pesky cellphone videos posted on social media.  Ultimately, the regime must concoct a plausible story as to why, despite all its boasted successes, people are rioting in the street and being shot at by security forces. 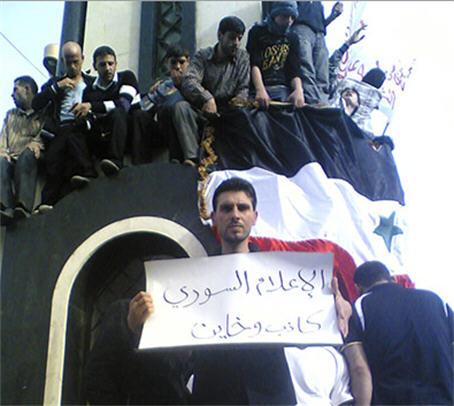 Attempts to cobble together a narrative, however, have lapsed into incoherence.

The Syrian propaganda machine has been trying to skew every bit of news. By putting the different contradictory accounts together, the line of events in Syria would look something like this: There are no protests in Syria, but a foreign conspiracy, with arms smuggled from Lebanon, that is targeting Syrian officers and soldiers, while President Assad rushes to implement reform, after which the non-existent protests will not be tolerated.

The regime lately claims to have discovered an insurrection by “armed Salafists,” raising the specter of Hama.  This may be a bid to solidify support among Assad’s fellow Alawites, who consider themselves Shia and live in dread of Sunni religious zealotry.  It certainly won’t intimidate other Syrian groups – who continue to protest with growing confidence – or persuade the global public.

Assad’s weakness and confusion invites a show of strength.  Activists in Homs and elsewhere have called for massive protests tomorrow, Friday, after prayers.  The regime, now in a serious state of alarm, has mobilized the forces of repression.  Whether it survives by the barrel of the gun or not, there will be blood in the streets of Syria during the coming days and weeks.  The perpetrators will be known and recorded for the world to see.  How global opinion – including that of the US government – reacts will determine Assad’s fate as much as any victory over his own public.  His best hope, in this regard, is for the attention of the world to remain mesmerized by the war in Gaddafi’s Libya, and thus fail to note the slaughter by another autocrat in another land.

UPDATE:  This was sadly predictable.  I will post the videos from today’s demonstrations/massacres separately. 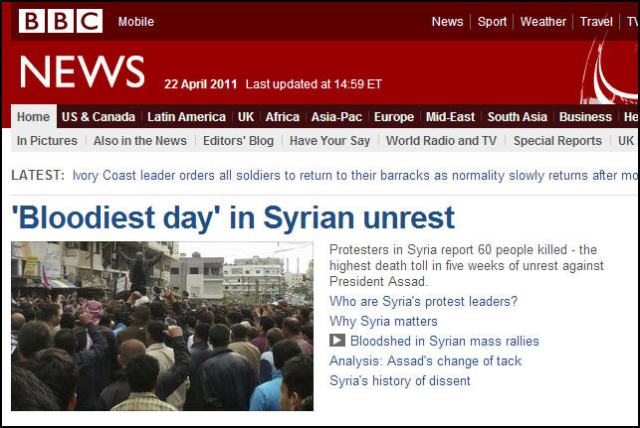 This entry was posted in cataclysm, narratives. Bookmark the permalink.