The death of Bin Laden as information and influence 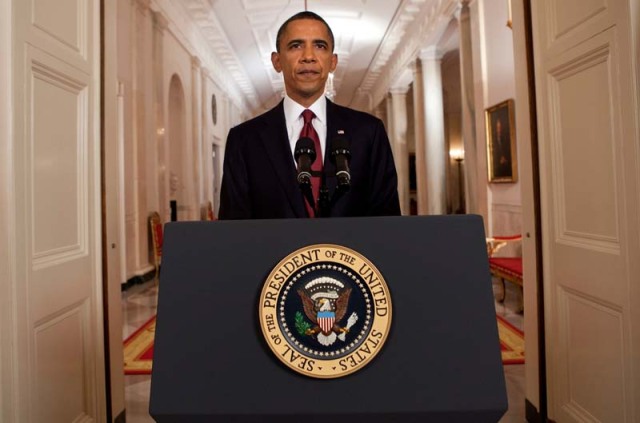 On Sunday, May 1, an elite and secretive team of US operatives killed Osama bin Laden in his hideout in Abbottabad, Pakistan.  Many Americans, myself included, applauded the demise of the infamous promoter of global terrorism and mastermind of the atrocities perpetrated September 11, 2001.  Once the brief battle was over, however, a strange transfiguration overtook Bin Laden and all those involved in the action:  they became information, which individuals and groups across the world sought to wield as influence on behalf of their agendas.

This isn’t as sinister as it sounds.  Bin Laden’s death is a fragmentary story of tremendous symbolic power.  Because human nature insists on meaning, the story, to be complete, must be grafted on a master narrative which explains it in terms of specific ideals and a specific history.  Thus Barack Obama, president of the United States, portrayed the episode as an example of American tenacity in the pursuit of justice, while Hamas, a violent offshoot of the Muslim Brotherhood, described it as the murder of a Muslim warrior at the hands of the infidels.

The metamorphosis began with the president’s televised statement Sunday night.  It broadcast more than an hour after the announced time, a delay which removed the element of surprise but also heightened the drama and suspense, feeding a frenzy of speculation on Twitter.  By the time he strode up to the podium, President Obama faced an immense and riveted audience.

In fact, the president addressed several publics.  Most important, in a season of political discontent, was to communicate an American victory to the American public – the electorate which will decide on his reelection.  To the Muslim public, he affirmed that the US was not “at war with Islam” but that Bin Laden, on the contrary, was a “mass murderer of Muslims.”  To the government of Pakistan, where the operation had taken place, the president offered a thin veil of cover and ambivalent praise.

It was an effective performance.  Cheering crowds gathered outside the White House and at Ground Zero in New York, and the audience at a Mets-Phillies game in Philadelphia, on hearing the news, burst into spontaneous chants of “USA.”  President Obama’s popularity, sagging for months, seemed to rebound vigorously.

One weakness of the statement was a paucity of facts about the operation itself.  Follow-up accounts by administration figures added a handful of details, but these were frequently contradictory and left the story incomplete and unexplained.

By far the most confusing briefer was John Brennan, White House lead for counterterrorism.  In a meeting with the press corps, he claimed that Bin Laden had used a woman as a human shield, and went out of his way to call attention to the hypocrisy of the terrorist chieftain:  “Thinking about that from a visual perspective, here is bin Laden, who has been calling for these attacks, living in this million dollar-plus compound, living in an area that is far removed from the front, hiding behind women who were put in front of him as a shield.  I think it really just speaks to just how false his narrative has been over the years.”  In his eagerness to demolish Bin Laden’s narrative, however, Brennan got ahead of the facts.  It turned out that there was no human shield.  Bin Laden was apparently unarmed when shot.  Even the value of the Abbottabad property has been disputed.  Brennan insisted repeatedly that Bin Laden had been buried “in strict accordance with Islamist precepts and practices” – a strange priority for a man the president had called a mass murderer of Muslims.  When asked about the unusual decision to bury Bin Laden at sea, Brennan, an old CIA hand, seemed unwilling to provide a straightforward explanation.

That was Monday.  By Wednesday, the administration’s lack of interest in telling a coherent story had itself become a story.  “Liberal Muslims who are very sympathetic to the death of Bin Laden really don’t know what to think,” stated a journalist who was himself a liberal Muslim. “The American story is very confused.” The president refused to release images of the Abbottabad raid or of the dead Bin Laden, to avoid, he said, their use “as a propaganda tool” by terrorists.   In an age of visual persuasion, this blank screen policy was sure to feed doubts about the credibility of the administration’s account.

Such doubts have focused on the morality of the operation.  In the vacuum left by the administration, standard pacifist and anti-American master narratives could be deployed to criticize the American government and public without appearing to endorse Bin Laden.  In the US, a condemnation of the cheering crowds, originally posted on Facebook, spread an invented Martin Luther King quote across the web.  While the quote was debunked, the issue didn’t go away:  was it right to cheer the death of any human being?  In Germany, Chancellor Angela Merkel was criticized for saying she was “pleased it was possible to kill Bin Laden.”  “As a Christian I can only say that a targeted killing is no reason for celebration,” said a Green parliamentarian in a typical formulation of the criticism.  Since German politics are rarely driven by religious scruples, this must be seen as an appeal to widespread pacifist sentiment, often wedded to a narrative which contrasts the peaceful German to the bloodthirsty Americans.  The shooting of Bin Laden, and the mangled US government messaging, allowed some Germans to bask in the sunshine of self-righteousness.

Elsewhere in Europe, prominent voices on the left placed the incident squarely within an old and comfortable anti-American narrative.  The editor of the French daily Liberation decried the “toxic rhetoric” of the war on terror, on which he blamed the “base, uncomfortable joy… that blew yesterday over the streets of New York.”  The Archbishop of Canterbury wondered aloud about the contradictory versions coming out of the White House and added, “I think that the killing of an unarmed man is always going to leave a very uncomfortable feeling because it doesn’t look as if justice is seen to be done in those circumstances.”  In an interview, Tariq Ramadan accused the president of playing politics with Bin Laden’s death, and claimed to be troubled by a multitude of “questions” about the incident.  Such comments walked a fine line, placing the US in its accustomed place as villain of the story while carefully avoiding an embrace of Bin Laden or terrorism.  Their effect, however, was to undermine the moral basis of the contention that the killing had been an act of justice.

The president’s dilemma was that the critics at home and abroad were his political kindred.  Barack Obama rose to prominence by attacking the Bush administration’s methods in the war on terror, and early in his presidency, after reiterating that his predecessor had gone “off course” during a “season of fear,” he banned enhanced interrogations.  Now it developed that two of the captured Al Qaeda leaders waterboarded by the Bush administration had begun the thread of intelligence which led eventually to Bin Laden.  The unit which carried out the Abbottabad operation had also been established by President Bush – and denounced by his opponents as an “executive assassination ring.”

The ground on which President Obama could erect a satisfactory narrative was thus narrow and shifting.  If the anti-war left criticized the morality of the attack on Bin Laden, pro-war conservatives, hostile to the president on most political questions, felt their narrative had been vindicated, and sought to reopen the debate on the proper methods for the struggle against Al Qaeda.  “While we may not know all the details about and behind this operation,” wrote Michael Barone, “it’s fascinating to see how many of the things that made the success of this operation possible were not so long ago decried by many of the president’s fans and fellow partisans.”  Barone specifically alluded to “those infamous enhanced interrogation techniques.”  For his part, Charles Krauthammer approvingly called Bin Laden’s death an “execution” and observed, “Al Qaeda is not subsiding on its own. […] It is in retreat because of the terrible defeats it suffered once America decided to take up arms against it, a campaign (once) known as the war on terror.”

This conflict of narratives spilled into questions of foreign policy:  information surrounding Bin Laden’s death became an argument for withdrawal from Afghanistan and winding down the war on terror.  In Afghanistan itself, officials worried about a loss of US support, while President Karzai used the event to score points against the Taliban and Pakistan.  The Pakistani government, in turn, faced a double-edged problem:  how to explain Bin Laden’s presence in Abbottabad, and how to respond to a US attack on its soil.  By the end of the week, it had conspicuously failed to come to grips with either side of the equation – and the country’s standing with American public opinion had taken a direct hit.

The lack of a persuasive US government narrative heightened the regional sense of instability.  Continuity of policy with regard to Afghanistan and Al Qaeda was affirmed, but in declarative sentences deaf to the anxieties generated by the altered landscape.  About Pakistan’s role in the affair, the story seemed to waver.  After President Obama stated that “cooperation with Pakistan helped lead us to Bin Laden,” Brennan revealed the Pakistanis had not been informed of the raid, and said he found it “inconceivable that Bin Laden did not have a support system in the country.”  The president later gravitated toward Brennan’s position, refusing to rule out involvement by Pakistani officials.  US expectations of Pakistan – always bound up with our intentions in Afghanistan – remained unclear.

The most immediate impact of the death of Bin Laden may have been to knock out an already wobbly negotiation process between Israel and the Palestinian Authority.  Driven by the logic of its master narrative, Hamas chose to lament the “assassination” of an “Arab holy warrior” in what it considered “a continuation of the American policy based on oppression and the shedding of Muslim and Arab blood.”  Since Hamas had just forged a Palestinian unity government with Fatah, the likelihood of future US support for peace negotiations with Israel diminished to the vanishing point.  (For his part, Prime Minister Netanyahu pointedly stepped into the cheering controversy:  “the State of Israel,” he declared, “shares the joy of the American people on this historical day.”)

The US killed Bin Laden in a campaign to destroy the terrorist organization he founded.  The influence of his death on Al Qaeda is thus an important open question.  Beyond threats of retaliation in Islamist websites, little in the way of public reaction can be expected from what is, in essence, a band of conspirators.  Al Qaeda’s master narrative, however, will pull in two opposite directions.  At one level the group is a death cult.  The violent end of their leader will be accepted as natural and deserving of celebration.  On another level, it considers itself to be the second coming of the companions of Muhammad:  invincible against all odds, because of superior faith and courage.  It is this aspect of the Al Qaeda narrative which will have difficulty explaining the failure of Bin Laden, in his final battle, to put up much resistance to the infidel forces.

This entry was posted in influence, narratives. Bookmark the permalink.