A threshold moment: Egypt’s public, up for grabs 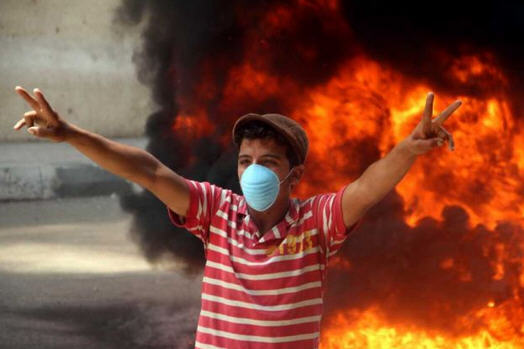 Sometimes an angry public withdraws from the structures and hierarchies which organize social life.  These are epochal occasions – the great hinges that turn a nation’s fate.  The power of the public resides in numbers.  If enough individuals abstain from the established order, the latter will be hollowed out and cease to function.  It will totter on the brink.

The prototype for this kind of action was furnished by the ancient Romans, who literally walked out on their city and its ruling class.  The effect, Livy informs us, was “panic.”  In modern times, the secession of the public has been internal rather than physical, but the consequences have been no less frightening to those in authority.  I still recall the flustered look on the face of Romania’s Nicolai Ceausescu, when the crowd he was addressing suddenly began to shout back.  Ceausescu had ruled with autocratic arrogance, but four days after that moment of secession he was dead.

The public advances by negation.  It can batter down regimes, but being a many-headed beast it has difficulty articulating a positive program for the future.  In revolutionary situations, the public can become trapped in its own destructive fervor, leading to chaos in the short term and ultimately to loss of control.  Unruly Parisian crowds paved the way for the military dictatorship of Napoleon.

Today, the uprising in Egypt appears to be moving along the same trajectory.  Opposition to the regime of Gamal Mubarak galvanized the Egyptian public.  With the massive demonstrations which began January 25, it applied the power of numbers to bring about a crisis of the established order.  Mubarak unwittingly reinforced the sense of crisis – and advertised his own panic – by shutting down access to the web.  By mid-February, the protesters had achieved all their immediate objectives:  Mubarak was gone, along with the more noxious elements of his security apparatus.  A military government had taken over and promised elections and a new constitution.

At this point, the relevant question became what the long-term objectives of the rebellious public were:  the organizing principles it embraced to forge a new order.  No answers have been forthcoming.  Instead, we hear a babble of voices, empty slogans, and bitter complaints.  It is difficult to overstate the degree of fragmentation in Egypt today.  Over 80 political parties have sprung up out of thin air.  They borrow words like “Freedom,” “Justice,” and “Democratic” for their names, but most lack either history or ideology, and none appear to have sunk roots in the population.  Even so basic a question as whether elections should precede the drafting of a constitution leads by short steps to a shouting match.

Here is the problem:  the public remains withdrawn from all order.  It has seceded – not, like the Romans, to the Sacred Mount, but to a mysterious place better known to anthropologists than to political scientists.  In The Ritual Process, Victor Turner holds that life-transition rituals are “anti-structure”:  they detach individuals and groups from their place in the scheme of things.  Turner insisted that by anti-structure he meant “not a structural reversal… but the liberation of human capacities of cognition, affect, volition, creativity, etc., from the normative constraints incumbent upon occupying a sequence of social statuses.”  Initially, a ritual moves its participants to a place innocent of history, culture, and social structure.

Turner called this place “liminal,” a word that means threshold:  an empty space between the past and the future.  In rituals, the threshold leads to dramatic personal change.  One might enter a child, for example, and depart into adulthood.

The Egyptian public stands frozen in a revolutionary threshold, where all the dominant forces are anti-structure.  It has crushed the Mubarak dynasty and successfully demanded their prosecution.  It has caused the dissolution of the ruling party and many organs of repression.  It now peers into the future, and the only coherent vision that materializes is more of the same:  more protests, more demonstrations, more assaults on the “normative constraints” of social life.

Many powerful structures survived the uprising in Egypt – the military, the Sunni and Coptic establishments, moneyed interests, the Muslim Brotherhood, and the media, to name but a few.  It is interesting to note that they too are stuck in a threshold moment, caused by fear of the public’s rage and by the opacity of the future.  All established structures were implicated with the old regime.  None knows what the new regime will look like.  Dread of the fatal mistake has paralyzed and divided these groups.  A false move, they learned from Mubarak, can mean extinction.

The Muslim Brotherhood provides a case in point.  As the best-organized, longest-running opposition, the Brotherhood should be a dominant force in the politics of post-Mubarak Egypt.  Yet the leadership’s electoral strategy seems strangely risk-averse, driven more by fear of a public backlash than by lust for power.  The group will not field a presidential candidate.  The number of parliamentary candidates will be limited – the goal is to win 25 percent of the total.  Ambitious individuals have ignored this plodding approach, while younger members, infected by the spirit of anti-structure, have criticized their graybeard leaders.  Anathemas and schisms have ensued.  The Brothers resemble conspiratorial Bolsheviks less than Mensheviks unwilling to take power because the objective conditions aren’t ripe.  Like all who populate the existing structures in Egypt, they are caught in a threshold moment, waiting for a new order to become manifest.

The same can be said of mass media.  An excellent account of the new Egyptian media environment speaks of an “experimental phase,” with media and political players “seeking to find a new balance of roles and relationships.”  In fact, the country’s broadcasters and large-circulation publishers, docile lapdogs to the old regime, are now squeezed between two terrors:  of repression by the military government and of public outrage.  Whether they seek a new balance or – as a cynic might suspect – a new master, their actions have reflected a deep uncertainty about the future more than any desire for experimentation.

Every organization and coherent interest in Egypt is paralyzed by the public’s anti-structure rage.  But the public is fractured.  The public voices contradictory demands.  It may be that, like the Roman tribunes of the people, a rebellious public can oppose but never propose.  The peculiar nature of the crisis in Egypt will not be altered by this observation.  Out of the pharaonic ruins of the Mubarak regime, Egyptians must now conjure a new political architecture, a way forward, a plan for the future:  and the public, conqueror of pharaoh, occupies the only space from which such a new order can emerge.

A threshold, however, cannot become a dwelling-place:  it must be crossed.  The protests and threats of the public still intimidate, but no longer seem able to topple surviving structures.  The power of numbers – the ability to hollow out social and political institutions – may soon degenerate into mere political theater on the stage of Tahrir Square.  This will be noticed.  At some point, a cohesive group will sweep the public aside and impose its own solution to the crisis.  The military are the obvious candidates for the job.  Alternately, a charismatic leader may arise from the officer corps or the religious establishment.  Once the public is removed from the political equation, the future will be vastly simplified.

The trajectory of events in Egypt should trigger alarm bells in the stately offices of US policy-makers.  I’m not sure what our hopes for the country are, beyond uttering bromides about “democratic transition,” “transparency,” and “rule of law.”  I presume we prefer some outcomes to others.  If so, we should make our preferences clear now, and mobilize whatever means of persuasion we possess in support of those outcomes.

American influence, realistically, will be minimal.  The crisis of Egypt’s established order will be settled in the clash of Egyptian political forces.  But that settlement, I believe, will happen sooner than US diplomats imagine – and at that juncture our influence will be reduced to zero.  While the threshold moment lingers, we can appeal to the Egyptian public – a public which retains the power to decide the matter on its own terms, and whose opinions, it appears, are still up for grabs.

This entry was posted in Uncategorized. Bookmark the permalink.