Qaddafi’s hat: the lesson of Libya

On Monday, anti-regime forces stormed into Tripoli, abruptly ending Muammar Qaddafi’s 42 years of one-man rule.  The fortified compound where he had lived and staged his ceremonial occasions was overrun the next day.  His prized possessions were looted.  While the whereabouts and ultimate disposition of Qaddafi remained up in the air – a not-insignificant detail – his iron grip on power had slipped for good.

The Libyan experiment was over.  An armed but disorganized public, it turned out, could defeat the immense power of a modern government, even when wielded by a man who lacked inner restraints on the application of violence.  Persistence overcame bloodthirstiness.  True, foreign support, in the form of NATO air cover, had been required – but this was new and interesting information.  It suggested that other publics, caught in the crossfire of the serial uprisings in the Middle East, might repeat the experiment with the same result.

A number of lessons are being drawn from events in Libya by those whose business it is to draw lessons from events.  A frequent theme has been that the fall of Qaddafi is bad news for other authoritarians in the region, and most particularly for Bashar Assad of Syria.  Writing in the New York Times, Anthony Shadid conceptualized the turmoil in the Middle East in terms of a single struggle with many battles:  with Qaddafi finished, “the uprising in Syria emerges as the frontline of the Arab revolt.”  In a similar vein, Marc Lynch posited a “highly unified Arab political space,” then explained what this meant:

Arabs from Yemen, to Syria, to Morocco experienced Qaddafi’s fall as part of their own story.  And they are clearly inspired, energized and galvanized.

This, too, is an interesting idea.  Libya is not very much like Syria, and the two regimes, while similar in their brutal despotism, are really quite different in important respects.  Shadid cited, and appeared to endorse, “Syrian activists” who reject facile comparisons between the two countries.  So it’s fair to ask just how the misadventures of Qaddafi in Tripoli might threaten Assad’s rule in far-off Damascus.

Lynch’s answer is “demonstration effects.”  He means the influence of information about one event upon another.  Governments once controlled the means of communication precisely to avoid such unpredictable effects.  Authoritarians like Qaddafi and the Assads parceled out information about the world to their publics, and about their countries to the world.  The Libyan experiment signals the fatal collapse of this model, even in a country with restricted access to connectivity and social media.  Information today is no respecter of borders, or of brute force.

In Syria, the opposition crowds, under attack by their own government, received news of Qaddafi’s downfall and made comparisons.  We know this because shortly after the storming of Tripoli they began to chant, “Qaddafi’s gone; now is your turn, Bashar!”  In truth, Syrian protesters seemed energized and galvanized about events with no material impact on their situation.  The impact, we must assume, was of a different kind:  categorical, informational.  Despite objective differences, people drew a symbolic connection between Qaddafi and Assad, and in this domain claimed to have discovered a transcendental similarity.  Persistence, they felt, would trump bloodthirstiness in Syria as it had in Libya.

Information effects are universally accepted yet almost impossible to prove.  Even when there has been a direct reference to another event, as with the Syrian crowds, multiple interpretations are possible.  The reference can be pure propaganda, for example – with no real impact, objective or subjective, on anyone.  In addition, political information traverses a hotly contested space.  In the case of Libya, both sides have been willing to jettison honesty for political advantage.  A crowd in an Aleppo café cheered, we are told, when they heard of the capture of Saif, Qaddafi’s son and crown prince.  The cheers were evoked by misinformation:  Saif remained free, and Libyan insurgent groups, their credibility damaged, stumbled over one another to explain the original report.

My guess is that the most potent effect available to information is the revelation of a precedent, the opening of a door to circumstances hitherto believed to be impossible:  the “demonstration” part of Lynch’s phrase.  This can influence governments no less than the public.  Assad, as Lynch observes, followed Qaddafi’s lead in rejecting the passive approach of Mubarak and Ben Ali, instead declaring war on his own people.  Now other governments judge the Syrian regime based on the demonstrable consequences in Libya.  Turkey’s foreign minister, for example, declared the Libyan revolution to have taken place “in compliance with people’s demands.”  He then issued a warning:  “Leaders of other countries must also be aware of the fact that they will be in power as long as they satisfy the demands of the people.”

Assad himself, whose bad luck it was to stage an interview on the day of Qaddafi’s downfall, felt obliged to reject calls for his resignation and to insist the regime “will not fall.”  He denied any symbolic connection to the defeated dictator, yet stared fixedly, with a fearful fascination, at his political specter.  That was the theme of the interview, the explanation for Assad’s remarkably defensive statements.

As for the Syrian public, I agree with Lynch that it belongs with a “unified Arab public sphere,” powered by pan-Arab TV and social media.  But it is also part of a global public – vastly larger and more varied than anything in the Arab world, and with a different moral and political center of gravity.  How judgments are reached about what is attention-worthy and praiseworthy among these three levels of description – national, regional, global – would make an excellent topic for research.

Not that the Syrians needed help to make up their minds about Muammar Qaddafi.  They knew the type unto death:  the Arab despots who for two generations puffed up their own importance while burying the region in a deep freeze.  In this group, Qaddafi stood out as an exemplar of vanity and arbitrariness.  He changed the Libyan flag and proclaimed a new national philosophy of life.  He surrounded himself with female bodyguards and built an underground river in the Sahara.  He wore outlandish robes and splendid uniforms with jauntily-angled hats.  He could do all this because he had an inexhaustible supply of petrodollars and a world-class talent for repression. 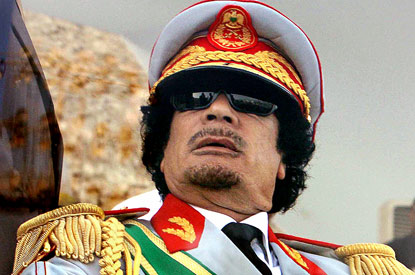 Dictatorship must have seemed an eternal condition, like nature itself.  This is what we, in the liberal West, must remember when we consider demonstration effects on the Libyan or Syrian public.  The rule of Qaddafi and the Assads was without challenge and without end.  Qaddafi’s bizarreness only made him more sinister.  He willed his creepy version of reality upon the public, and the public, however repelled, could not think of a single instance of their ruler’s will being thwarted.  There was no precedent for a challenge to power, much less for a successful revolt.

That has now changed.

In the video above, a tall and striking-looking Libyan fighter wears one of Qaddafi’s funny hats.  The young man is polite and well-spoken.  He’s an ordinary person, not a dictator, not a megalomaniac.  The hat looks preposterous:  a joke.  Reality now belongs to the young rebel, who embodies the public in revolt.  The hat is a small thing but an enormous event.  A Syrian watching the video would sense this instinctively.  The bullying, mock-heroic pose of the dictators can be reduced to a joke.  It’s possible.

For the Syrian audience, the change in the status of Qaddafi’s hat would be the lesson of Libya.

This entry was posted in influence. Bookmark the permalink.

5 Responses to Qaddafi’s hat: the lesson of Libya