The crisis of European democracy

With the victory of the Syriza Party in Greece, the sickness of European democracy has entered a potentially fatal stage.  Greece is only an indicator – the shrieking alarm around the hospital bed.  Other political establishments in Europe, equally prostrated, hear the sound and shudder.  The Greek present is their future.

The forces at play are global and secular.  There can be no quick cures, no escape acts, no tricks to conceal the helplessness of a political order that has controlled the continent for two generations.

Syriza promised what Greek voters wanted:  the impossible.  The party is run by unreconstructed Marxists nostalgic for the Soviet era.  But it won, and won big, chiefly on a platform of negation and repudiation.  Syriza stands firmly against the European Union, the euro, austere budgets, debt payments, capitalism, the Germans, the banks, “the rich, the markets, the super-rich, the top 10 percent.”

The status quo became the enemy.  Those who promised to smash it with the most destructive zeal have become saviors.  Negation triumphed in part because the Greek public mistook vandalism for salvation, but also because Europe’s political class has lost the will to grapple with reality.  The cluelessness of rulers, exposed for all to see by the Fifth Wave of information, has triggered an extraordinary reordering in human relations:  and liberal democracy is in play.

Democracy isn’t on the Syriza demolition list, but neither is it particularly valued.  “Our foremost priority is that our country and our people regain their lost dignity,” says the new prime minister, Alexis Tsipras.  That probably means clobbering the status quo and the super-rich.  For their part, Europe’s elites wish to retain control.  The public wants utopian outcomes.  The creaking machinery of representative democracy, with its compromises and manipulations, seems to get in the way of everyone’s priorities.

Europeans have never been sold on democracy.  From Robespierre to Putin, they have been largely persuaded that dignity – justice, equality, all the political virtues – must be conquered at the point of the bayonet.  State power exists and expands for that purpose:  individual dignity, like the old titles of nobility, must be granted from above.  That’s how Tsipras understands his mandate.

European elites fear and loathe their own public, which they hold responsible for the nationalist outbursts that twice destroyed the continent.  They have evolved a form of democracy in which nothing is decided by elections, and they have organized society so that political discussion gets herded into a small safe space by the power of taboo.  The public thus votes but never chooses, talks freely but with little to say.

This sterilized approach to democracy deals with painful political questions by denying their existence.  Immigration, for example, was never seriously debated anywhere in Europe.  Guest workers who had been invited during the fat years stayed for the lean, and a sudden migratory tide of millions materialized, unsought and unplanned, in nations whose identities were firmly linked to blood and land.

It is remarkable – I want to say, pathological – that basic questions about social costs and benefits were never considered.  Such discussions were declared beyond the pale by elites who remembered the horrors of Nazi Germany and their own colonial crimes, and feared the inherent racism of the public.  The immigrant became a test of European virtue.  Intellectuals applauded, while governments looked the other way.  The public, as usual, was told, not asked:  that was the point of the exercise.

The European Union and its precursor organizations have been central to the politics of denial.  The EU is totally undemocratic.  Its parliament, a bizarre collection of elected eunuchs, seems to exist as a mockery of the democratic ideal.  The language of the treaties which constitute the Union is both verbose and impenetrable.  Nobody has the slightest idea what the EU’s powers are or should be.  Nobody cares.  Its bureaucracy touches everything but achieves no known purpose – a useful attribute for national governments bent on avoiding reality.  The EU is a bit like the elephant graveyard:  a place where large questions go to die.

The public responded to political emasculation the way the public always does.  So long as times were good, it was happy to play the elites’ game, but once the economy wobbled and then fell apart in 2008, it began, like the Roman plebs, to secede from the system.  The public is walking away.  Because of the virtuous silence of the thinkers and the media and the politicians – because in Europe nothing gets decided, nothing gets discussed – the first step out is a long one. 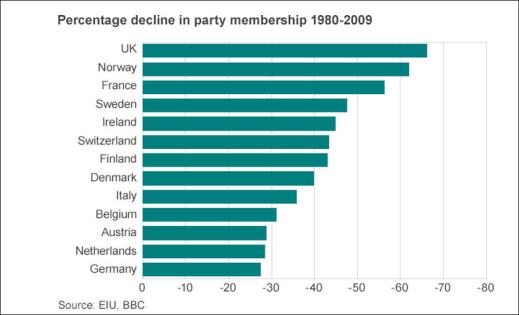 While orthodox parties peddle avoidance, ordinary voters, in despair, turn to strange new political groups.  Syriza, National Front (France), Five Star (Italy), UKIP (Britain), have emerged from left and right:  but such labels, which refer to a dead world, lack precision here.  The new movements gather beyond the pale.  They are taboo:  that is their appeal to the public and their true orientation.  They put in play forbidden subjects, eternally settled questions – the economic system, immigration, the EU.

The rise of youthful political forces in opposition to a senile old guard sounds like a happy story.  However, there’s a hitch.  The rebels are fixated on the status quo.  They are consumed with grievance and accusation.  As Europe’s elites reject the content of reality, their radical opponents restrict reality to the elites.  Their revolt isn’t about reform or revolution, but is a sort of utopian mirror imaging at best – and at worst a parasitic dependency on the failure and decadence of the system.

Negation, in the form of Syriza and its long hit list, confronts paralysis, embodied by the decrepit European institutions that hold Greece’s debt.  The struggle will be conducted with all the integrity of a professional wrestling match, but there will be winners and losers.  Neither side has much love for the niceties of representative democracy.  Both can be expected to seize any possible undemocratic advantage.  The keepers of the old order will try to place tight boundaries around the Syriza government, for example.  Syriza in power will trample on due process to settle scores.

It is possible, even justifiable, to deride the Greeks for reaping the whirlwind of a culture of corruption:  but, from a certain perspective, they appear merely to have moved faster and gone further in the direction we are all headed.  Greece represents one logical outcome of the global collision between the public and authority in the age of the Fifth Wave.  In this version of the future, nihilism assumes the aspect of freedom.

Democracy can fail.  It has done so in Europe, multiple times, within living memory.  Greece, which delivered the infant ideal of popular government to the world, may get the opportunity to throw the first spade of dirt on European democracy’s unmarked grave.

This entry was posted in democracy, the public. Bookmark the permalink.