ISIS and the war on history 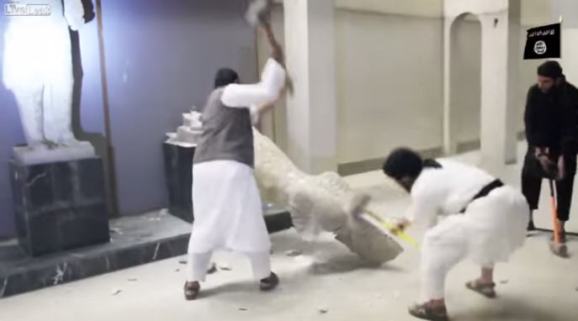 Barbarism As a Feature, Not a Bug

The Islamic State’s apparent destruction of ancient artifacts at a Mosul museum has been called “barbaric” and “an odious crime…against the heritage of humanity.”  But what looks like barbarism to François Hollande – in his words, an attack on “people, history, memories, culture” – is to ISIS a strategic objective.  The group has been waging a revolt against history and memory that is even more ruthless than its war against the governments of Syria and Iraq.

By a sufficiently savage negation of the past, followers of the caliphate mean to demolish the odious present order of things.

This is an extreme version of a familiar story.  The impulse to repudiate history and break free of its causation has been a prominent feature of what I have called the revolt of the public:  the serial uprisings that have battered governments and institutions around the world since at least 2011.

Everywhere the rebels – mostly young, media-savvy, glib rather than deep – have demanded the restoration of virginity in human relations.  Craving pure, authentic lives, they imagined innocence was natural and Eden near at hand, if only the stain of events was washed clean.

Paradise could be reached from any number of ideological directions.  For the indignados of Spain, it was an anarchist utopia.  For the National Front, it’s an ideal France, purified of foreign elements.  For Syriza in Greece, it’s a neo-Marxist people’s state.

For ISIS, it’s the caliphate.  The rhetoric is Islamist, but the aspiration, the inchoate vision behind the words, is far more contagious than sheer religious mania.

I want to be precise about what I’m saying.

Analysts have engaged in a delicate back-and-forth regarding the importance of religion to ISIS.  Barack Obama, for example, accuses the group of having “perverted Islam,” while Graeme Wood arrives at the opposite conclusion:  “the reality is that the Islamic State is Islamic. Very Islamic.”  Much of this talk is posturing for the benefit of specific constituencies.

I take the influence of Islam for granted.  Many of ISIS’s weird bloodthirsty practices, Wood makes clear, look back to early Muslim traditions.  Once that is accepted, the meaningful question, let me suggest, becomes whether we can safely quarantine the barbarism of ISIS within a space called “Islam” – perverted or not – or “Arab culture,” or “the Middle East.”

I’m going to argue that we can’t:  that the pathologies involved are viral and global, and can be detected by a horror of history.

The Lure of Apocalyptic Politics

The sincerity of ISIS’s quarrel with history can scarcely be doubted.  Its minions not only smashed the statuary at Mosul Museum – they made a show of it.  In a five-minute video, posted online, burly bearded men huff and puff and pull the ancient idols down, taking sledgehammers and jackhammers to the fallen figures.  The frenzy is at times recorded in slow motion, for romantic effect.

This is vandalism as political theater, performed for the edification of the world.  The lesson is simple.  Since the seventh century, the human race has been entangled in lawlessness and moral chaos.  The implicit solution is equally simple.  ISIS doesn’t mean to change history but to end it.

The human race is being invited to jackhammer its way to the apocalypse.

Although followers of ISIS speak in an opaque theological jargon, there’s nothing peculiarly Muslim or religious about yearning to escape the coils of history.  Their message has resonated with thousands from secular Western countries who have flocked to the caliphate.  Many knew just a few words of Arabic.  A significant minority was of non-Muslim origin.  They chose barbarism over boredom, becoming actors in the apocalyptic drama instead of software programmers back home.

“Jihadi John,” star of ISIS beheading videos, turned out to be a computer science graduate of the University of Westminster.  Some expressed shock, but he fits the profile.  Radicalism today has nothing to do with the poor or the downtrodden, but is all about the existential frustrations of young college-educated professionals immersed in the new communications technologies.

With a slight twist of the dial, Jihadi John could have been Occupier Ozzie or Indignado Juan.

If you happen to be a member of this privileged caste, history has always felt like grievance.  This is so regardless of ideology.  Tea Party activists can casually observe that it has taken “a hundred years or so to reach our present state of crisis.”  Feminists go one better, locating the Fall of Woman “in the second millennium BC.”  The indignados claimed that modern Spain had slipped from military dictatorship to a “partycratic dictatorship.”  Implicit in Syriza’s Marxist rhetoric is the belief that all history “is the history of the class struggle.”

Anders Breivik murdered 77 persons, including many children, in placid, affluent Norway:  in the manifesto in which he explains his turgid ideological motives for the atrocity, the word “history” recurs 510 times.

For rebels on the right, history is the pollution of a once-perfect society.  For those on the left, it’s the obstruction of every progressive demand.  But “right” and “left” have limited descriptive value in this context.  Insurgent sects have been violent and nonviolent, statist and individualist, secular and religious:  such differences do make a difference.  All, however, agree that the times are out of joint – that history is stuck in a tormented place.  All convert their rejection of the past into a sincere and ferocious loathing of the present, of every arrangement that surrounds and sustains their current lives.  They want out.

The political apocalypse seduces because it is, at bottom, a nihilist’s dream.  That may well make the biggest difference of all.

The Caliphate As Hollywood Revenge Fantasy

While ISIS has the surface look of a retrograde movement, it moves easily among the obsessions of the left and the right.  The End of Time can be interpreted as a restoration and purification, or a complete break with the past in the manner of Marx’s communist society.  Adherents may be reactionary in dress and theology, but on the subject of social change “they sound like Che Guevara.”

Even the frantic performance in Mosul was ambivalent on this score.  “We want to demolish the museums” is a line from the Futurist Manifesto – not the Quran.

In fact, the Islamic State is a product of our moment.  To attract a public, it must flatter contradictory opinions, and do so visually and vividly online.  (We sometimes forget that the movement isn’t the sum of all its videos.)  To overcome the contradictions, it must fix the attention of supporters on their shared nihilism:  that is, on the all-consuming desire to destroy the institutions that govern the modern world.

The caliphate, I want to say, is less a government than a visceral impulse against.  Every positive program or plan will divide the faithful and set them one against another.  That is likely to happen eventually.  The recurrent revolts undertaken under the conditions of the Fifth Wave have had a limited shelf life.  But for the moment, advocates of the new Eden, Arab and European, romantic reactionary and social revolutionary, can all indulge in what they truly love to do:  take a sledgehammer to the status quo.

Oppositional rage defines the person and the message of the recently anointed caliph, Abu Bakr al Baghdadi.  Baghdadi is a man who practices what he preaches.  Before becoming spiritual guide to all Muslims, he was responsible for the suicide attack on a famous mosque in Baghdad.  His language shimmers with a peculiar violence.  Of worldly life he says:  “kick it down, trample it.”  Alien ideologies also deserve a thrashing:  “trample the idol of nationalism, destroy the idol of democracy.”

In the Ramadan sermon from which these citations were taken, preached not far from Mosul Museum, Baghdadi lays out the grand vision of the caliphate he now rules.  In every detail, it’s a revenge fantasy in the best Hollywood tradition.  The plot begins with a history of unending oppression:

Indeed the Muslims were defeated after the fall of their caliphate.  Then their state ceased to exist, so the disbelievers were able to weaken and humiliate the Muslims, dominate them in every region, plunder their wealth and resources, and rob them of their rights.  They accomplished this by attacking and occupying their lands, placing treacherous agents in power to rule the Muslims with an iron fist, and spreading dazzling and deceptive slogans such as:  civilization, peace, coexistence, freedom, democracy, secularism, baathism, nationalism, and patriotism…

With the establishment of ISIS and the caliphate, the heroes appear on the scene, and the real action begins.  First comes a rupture with history:  “let the world know that we are living today in a new era.”  Then oppression in the tainted past becomes the pretext for the bloody mayhem of the new dispensation.

Baghdadi and his disciples, like Jihadi John, are sincere believers, willing to die as well as kill for the cause.  No one can doubt that.  But they have bent their beliefs to a specific purpose.  Early Islam, for them, performs the work that “real democracy” did for the secular Spanish protesters of 2011.  Both are ideals of perfection wielded without mercy against an imperfect world.

The War on History and the Irresistible Future

From this analysis it follows that the Islamic State conforms to a new type of revolt from below, one that has tended to be visually dramatic, sometimes physically destructive, yet always ephemeral.

Recall that the Tahrir Square protesters brought down Hosni Mubarak’s regime within three weeks, then disintegrated into squabbling factions.  The indignados helped obliterate the ruling socialist party, but that meant the triumph of the conservatives, not the rebels.  The Tea Party smashed Barack Obama’s governing coalition in 2010, but failed to unite behind a candidate in 2012 and was helpless to prevent the president’s reelection.

The precursor organization to ISIS – Al Qaeda in Iraq, under the leadership of none other than Abu Bakr al Baghdadi – was defeated in the “Anbar Awakening” by the Sunni tribes it sought to rule.

Apparently, negation and nihilism can only be pushed so far before the destroyer self-destroys.  The rebels are the favorite children of the digital age.  Much of their effectiveness derives from their ability to manipulate new media.  Yet everywhere we encounter them in the act of wrecking the social and political conditions that brought them into being.

If they are striking poses, lack of gravity will pull them apart.  That has often been the way with protesters in Europe and the US.  But if the rebels are serious and somehow succeed in disconnecting from the society that engendered them, the effect will be identical to suicide.  Politically, they will vanish into air, as if they had never been.

This sounds like good news but, in truth, is very cold comfort.  We don’t know just how long the caliphate will keep its grip on power.  We do know that there are no internal limits to the barbarities it will perpetrate so long as it retains any capacity to play out, on an endless loop, its fantasy of cosmic revenge.

We know, too, that in wanting to erase history, to organize humanity beyond the reach of the human condition, ISIS isn’t eccentric or unique.  For people of a certain age and education – and for reasons that have yet to be explained – apocalypse is in the air.

Don’t be surprised to find multiple avatars of ISIS in our future.

This entry was posted in the public, visual persuasion. Bookmark the permalink.

3 Responses to ISIS and the war on history