I don’t want to add to the noise surrounding the New York Times’ decision to move most of its content behind a paywall, and charge as much as $455 yearly for access.  The paper tried before to wall off its opinion pieces, and failed.  The current payment scheme resembles something concocted by a Federal regulatory agency:  too complex for mere mortals, riddled with loopholes, and full of perverse incentives.  Links from Facebook and Twitter are excepted, for example, thus driving readers to those sites.

Even the announcement in the pages of the NYT exudes dread and foreboding.  As in Greek tragedy, the authors know from the start that something horrible is bound to come from this move.  The mystery here isn’t the outcome, but the deep drivers forcing America’s foremost daily newspaper to jump, willingly, off a cliff.

A clue can be found in the violent collisions reverberating like thunder from the Middle East.  The NYT stood in the same relation to its customers as did Hosni Mubarak and Muammar Qaddafi to the citizens of their countries.  Each achieved primacy by exploiting a captive audience, and responded with horror and anger to the rise of a public which talks back.  All were swamped by a development they never came close to understanding:  our digital age, the fifth wave of information.

The dirty secret of newspapers is that they never sold news.  They sold advertisements.  Advertisers were promised readers, and readers were attracted, in part, by political news, but mostly by reports on sporting events, comic strips, entertainment gossip, horoscope readings, and crossword puzzles.  This mediation between business and customer returned generous profits, so long as newspapers could maintain local monopolies over their audience.

That day is done.  We know it, and the NYT knows it.  The problem isn’t the decline in paid circulation, down 18 percent since 2000.  It’s the collapse of the monopoly, and the mass migration of advertisers elsewhere.  Advertising revenues, after declining continuously for years, were down 2.7 percent in 2010.

Strapped for cash, the paper has had to sell its assets, beg from shadowy Mexican billionaires, and still cut costs relentlessly – an astonishing 7.4 percent in 2010.

Building a paywall is an act of desperation, not a business strategy.  Having lost the audience monopoly for the printed product, the NYT now looks to its website as a potential cash cow.  Whether this is warranted I will explore in a moment.  The decisive perspective here, however, is that of the paper’s managers and editors, as they contemplate the digital landscape:  how alien and threatening they find it.  Everything can be explained as a series of panicked gestures by people lost in a thicket.

Online ads are ridiculously cheap, and will never sustain the NYT’s operations.  At one level, the paywall is the final surrender of the advertising model, and an attempt to squeeze the reader directly.  Once you build a wall you get fewer readers, hence fewer ads – the hope must be that this somehow translates into more money.

Yet the digital environment, however frightening, is the future, the place where the most admired enterprises strut their stuff:  Apple, Google, Amazon.  The NYT must also see the paywall as a form of cosmetic surgery, to smooth away the wrinkles and silence annoying talk about the Gray Lady.  It wants to be cool, and have lots of friends on Facebook.  Hence the dispensation to the social nets.

The purpose of walled content collides with the wish to let in a crowd of random “friends.”  These are disconnected gestures – a roadmap to nowhere.

The paper’s disorientation derives from a troubling fact:  the position of the website is nothing like that of the printed newspaper in its heyday.  The old NYT – the proud Gray Lady – set the information agenda for the country.  I have been told that the network evening news to this day take their stories from the front pages of the paper.  In the new landscape, however, network newscasters are hemorrhaging viewers about as fast as newspapers are shedding readers.  The public has moved on.

The website is one point in a galaxy of many other sites.  Alexa ranks it 23rd in the country and 70th in the world; while actually not too bad, this is nothing like the towering dominance the print paper enjoyed.  Ahead of it in the US we find not only search engines and blogging platforms, but news portals like CNN and MSN.  The mediocrity of the NYT website can be illustrated by comparing its share of the online public to that of a late-comer to the news business, Huffington Post.  The paper barely edges out its younger digital sibling: 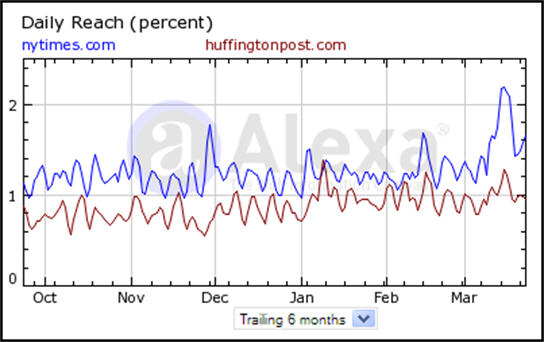 Compared to a new media giant like YouTube, however, the audience for the NYT site quite literally flat-lines.  The fatal problem is how to make that trickle of readers – who enjoy access to an endless number of free sites – pay enough hard cash to keep the paper’s staff in the style to which it was once accustomed. 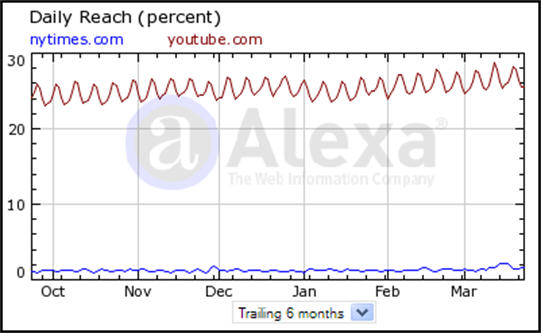 In the kingdom of information, the New York Times has gone from monarch to attendant lord, from lawgiver to plaintiff.  It takes no great insight into human nature to see why its people find this altered reality impossible to fit inside their heads.

This entry was posted in death of news, newspaperss. Bookmark the permalink.